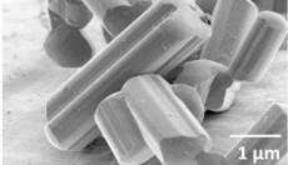 Credit: Zoomed in SEM images of morphology of Nb18W16O93 particles after calcination of 72 h (TCABT)

New technology to be used in lithium batteries can make them charge faster. The material graphite that was often used, already had a successor that could not further be improved, was the assumption. Until now, as researchers of the MESA+ Institute of the University of Twente found out that by nano structuring the material, new 'paths' will be created for lithium ions. This makes the battery charge faster, the researchers show in a paper published in the Journal of Power Sources.

Lithium Ion batteries can be seen in a wide range of applications. They truly changed our information society and our mobility. Lithium moves, through liquid, between two electroede. One of the electrodes used to be very simple, and made of graphite. The other, the cathode, consists of nickel, mangane and cobalt.

The alternative for graphite is niobium-tungsten-oxide. Researchers have found that charging is faster with this material. This is because the material has channels that give better access to the lithium ions; they move more easily than through graphite. The researchers note that NbWO already exhibits such excellent properties that nanostructuring it beforehand would have no added value. The UT researchers now demonstrate that nanostructuring indeed has a substantial effect.

They create these structures by heating the substance in an oven to calcinate it so nanoparticles remain. Their size can be between tens and hundreds of nanometers (a nanometer is a millionth of a millimeter). Many more "exits" for lithium ions are created in this way, because all nanoparticles can conduct lithium ions at their boundaries.

A downside is that this approach doesn't work for all types of applications. In electric cars, for example, you would need a larger battery pack, as every individual cell delivers less power with the new type of anode. But in peak shaving, compensating for an over- or underproduction caused by solar and wind energy, batteries are needed that can be decharged fast, but must also be recharged quickly. For these types of applications, including batteries in heavy machinery, the new electrode approach is fine, says professor Mark Huijben. The next step is to find the best size for the nanostructured anode. The cathode is also a subject of research, for example, in looking at ways of lowering the amount of cobalt needed.