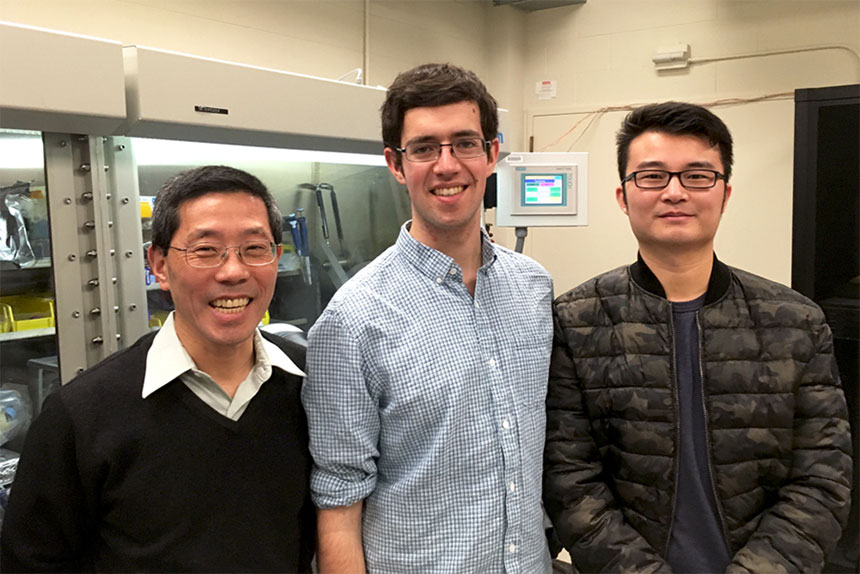 Kyocera Professor of Materials Science and Engineering ‪Yet-Ming Chiang (left), is working with MIT senior Harry Thaman (center) and postdoc Linsen Li to study a new kind of electrolyte for “self-healing” lithium battery cells, which will be formed by adding a halide element such as iodine.

Researchers at MIT and Carnegie Mellon University are studying a new kind of electrolyte for “self-healing” lithium battery cells, which will be formed by adding a halide element such as iodine, under a grant from the U.S. Department of Energy’s Office of Efficiency and Renewable Energy. The work could lead to longer driving range, lower cost electric vehicle batteries.

MIT’s Kyocera Professor of Materials Science and Engineering Yet-Ming Chiang and Carnegie Mellon University assistant professor of mechanical engineering Venkat Viswanathan received first-year funding of $456,742 through Sept. 30. The project has the potential to receive up to $1.25 million over three years.

“One of the most promising pathways to higher energy density vehicle batteries is to use metal electrodes such as lithium. However, to do so requires that we solve a problem first recognized 40 years ago. Even though lithium metal has been widely used in disposable batteries, it has not been possible to use them in batteries that undergo repeated charging,” Chiang says.

Through a combination of computer modeling work at CMU and experimental tests at MIT, the researchers hope to show that halide-enriched battery cells can electrochemically form a lithium-halide-based solid electrolyte to protect lithium metal electrodes. Electrolytes are the barrier through which the active elements of a battery, for example, lithium ions, cycle back and forth between a positive electrode and a negative electrode.

The researchers hope the combination of a lithium-halide solid electrolyte with lithium metal negative electrodes will slow or prevent the buildup of icicle-like metal filaments, known as “dendrites,” that build up on the metal electrode. This unwanted buildup eventually leads to battery failure. The researchers believe the iodine-enhanced electrolyte may offer a “self-healing” process that protects the electrode from sprouting these dendrites. Under this project, they will develop prototype batteries, whose performance can be compared to similar lithium batteries without halide additives.

MIT postdoc Linsen Li and undergraduate senior Harry Thaman are working on the MIT portion of the project.

The project is one of 35 that the U.S. Department of Energy selected last year to develop advanced vehicle batteries and electric drive systems.